Game on - is it less competition?

News of Microsoft taking over a gaming company Activision Blizzard is front page news here, here and here. While the nature of the proposed merger and the prospects it has for the gaming sector and Microsoft's role in it is on one side, the anti-trust/anti-competitive issues are also at the forefront of the debate.

Some of the questions that would be asked vis a vis the proposed merger are:

1. Does it substantially lessen competition and create a monopoly like situation in favour of Microsoft in the gaming sector?

2. This appears to be a vertical integration where a hardware company seeks to acquire a software gaming company. Does the approach differ if it is a vertical acquisition as against a horizontal acquisition?

3. Should Big tech be treated in a different way than traditional mergers in non-technology sectors?

4. Would consumers be impacted by the proposed merger as there may be more concentration of market power?

The Federal Trade Commission and the Anti-Trust Wing of the Department of Justice of the US Government recently sought public comments on how to approach merger enforcement in the light of the existing guidelines. One of the areas they seek comments are specifically on the digital economy:

f. How should the guidelines analyze mergers involving data aggregation as an important motive and/or effect? How should economies of scale and scope be measured in these cases?

The question is whether the nature of the digital economy requires  sui generis rules for combatting anti-competitive behaviour? Are traditional rules insufficient to address the peculiar characteristics including free products, data aggregation and interoperability that are seen in a digital market?

There are implications for international trade too. How does enforcing anti-trust rules strictly in a national setting impact competition in a global market? Is a tightly regulated internal market less advantageous vis a vis an economy that creates huge national players who compete globally? What impact do varied implementation of  anti-competitive regulatory frameworks have in enhancing market share in a global market? How does the policy of creating national champions for a global market interact with anti-trust enforcement in a local context?

The rise of patent applications - the story of globalization?

This short infograph from World Intellectual Property Organization on patent applications filed from 1985 to 2020 depicts in less than a minute globalization and the reality of multipolarity that truly is evident!

This is the last post for the year and it is on trade and climate.

Recent news of the compatibility of EU's Carbon Border Adjustment Mechanism have been discussed here, here, here and here. The EU CBAM is essentially a carbon tax on imports into the EU based on the carbon content of the product. Initially it covers iron and steel, cement, fertilizers, aluminium and electricity generation.

The questions of the measure being discriminatory and incompatible with WTO law would engage trade lawyers no end - from non-discrimination to like products to process and production methods debates. A WTO challenge, when the measure is in place, would be likely.

However, what caught my attention in the last week of 2021 is a piece by Christian Haberli on the inevitability of a challenge and what is the way forward. Titled Carbon Border Adjustment Mechanism + WTO = Impasse Totale? he suggests that a possible way out is the defunct dispute settlement mechanism. What I understood of this argument was that the crisis facing the WTO dispute settlement with the Appellate Body crisis is possibly a "quick way" for the implementation of the CBAM.

"... Might the absence of a coercing dispute settlement mechanism in the WTO open a window for the EU to proceed with a "clean and green" CBAM not entirely WTO-compatible?"

It is a non-trivial issue when one states that a non-functioning dispute settlement mechanism can impact effective implementation of WTO rules. The lack of the threat of effective enforcement can be a ground for WTO inconsistent measures to take precedence. While the merits of having such measures may be strong, it no doubt undermines the system. Today, climate change measures, tomorrow national security and day after may be labour enforcement? It seems that a lack of a strong dispute settlement mechanism can re-imagine domestic policy that impacts trade. However, will all WTO members be able to take advantage of this "temporary" stalemate or just a few?

Appealing into the void seems to be appealing now!

For those who missed the webinar on Appellate Body crisis and what the future holds for WTO dispute settlement, here is the video recording of the session. The session had Peter Van den Bossche, Joost Pauwelyn, Simon Lester and Cherise Valles debating on what is in store and how to get there!

The session brought up interesting insights on the standard of appellate review, the impartiality and fairness of judicial review, complexity of WTO cases, alternatives to the Appellate Body and how far they will go, differential deference standard for trade remedy cases and what the future holds for dispute settlement.

One would have to wait and see if the appellate review process gets back on track at the WTO anytime soon. What are the implications of this for multilateral trade rule enforcement, access to a rules based system, reversion to power dynamics in trade relations as well as the efficacy of global rules themselves.

Posted by Srikar at Saturday, November 20, 2021 No comments:

What will it take to get the Appellate Body back on track?

The Appellate Body at the World Trade Organization has been facing a severe existential crisis for a couple of years now. What can be done to revive it? Is it possible at all? What will it take for the adjudication system to be back on track? 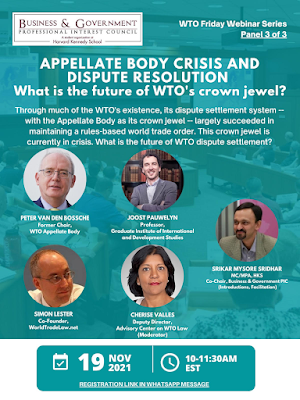 The zoom link is here - https://harvard.zoom.us/webinar/register/WN_u078UN5HQqCiF_IYkaipAw
Posted by Srikar at Thursday, November 18, 2021 No comments:

What next at the WTO Ministerial?

I recently introduced and facilitated a panel discussion on the likely outcomes for XII WTO MC to be held in a few days. Great inputs from Alan Wolff, Harsha Vardhan Singh, J.S.Deepak and Gabrielle Marceau on what the stakes are and what could be realistically achieved.

Views ranged from optimism on ambitious outcomes to a realism of national interests prevailing. Negotiation at the WTO has always been achieving that balance! Glacial speed negotiations with perennial optimism! 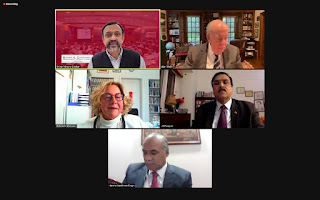 Alan Wolff, former DDG of the WTO, shared the written version of his text here. The video recording of the session is found here.

Watch the panel discussion and await a debrief from a month from now!

What is needed to end vaccine inequity - another trade and investment treaty?

Covid, unhindered trade and vaccine equity have been at the centre of the debate on resolving the world's largest public health crisis. Doing away with export restrictions on critical inputs, creating adequate manufacturing facilities to waiving intellectual property rights on vaccines have been offered as effective solutions to address the crisis.What is the appropriate policy response both international and domestic to get over the epidemic is a question that engages policy makers the world over.

An interesting solution offered by Chad P. Bown (PIIE) and Thomas J. Bollyky (Council on Foreign Relations) in the PIIE is of having a Covid Vaccine Investment and Trade Agreement (CVITA). They outline the 4 main features of the proposed agreement as follows:

1. Production allocation - whatever vaccines are produced by members of this agreement should be allocated between the global Covax initiative and used domestically. No room for vaccine nationalism here.

3. Prohibition of export restrictions on both inputs and final vaccines by signatories to the agreement

4. Transparency -  on supply chains, inputs and vaccine production by signatories.

The authors have mooted this as a deliverable at the XII Ministerial Conference at the WTO. Will the major players agree to this formula? Will the objective of vaccine equity be met with this arrangement? What about a waiver? The authors don't necessarily think it will work:

A second proposal, initially made by India and South Africa, was to waive patents for vaccines. Such a waiver by itself is likely to have only a limited immediate impact on increasing production, given that the main technological impediment to vaccine manufacturing is how to affirmatively transfer production knowhow, not the patent. (There are other impediments to scaling up manufacturing, such as insufficient supply of specialized inputs, inadequate regulatory oversight, and an inexperienced workforce, that a patent waiver would also not resolve.)

One must assess if this agreement is politically feasible at this stage of the crisis wherein major developing economies are still engaged in providing vaccination to their people.

Another interesting part of this piece was the diverse ways in which supply chains and production arrangements work for different pharma manufacturers. The supply chains of both Pfizer and Astra Zeneca were laid out.