On the anti-trust/anti-competition front there has been a long battle between the State and the large tech firms across jurisdictions - whether it is the US (traditionally), or the EU and more recently China.

A set of articles in the Project Syndicate addresses the varyng approaches of the US, EU and China in addressing the issue of the monopolistic or anti-competitive tendensies of the big tech firms like Google, Facebook, Amazon and Apple. Who is setting the rules on this engagement? How different are they? Are they enough to address the issues of privacy, antitrust and taxes?

Anu Bradford argues that the US is losing out to the EU in setting the ruls of the game. The EU is working aggressively on it and two new laws - the Digital Services Act and the Digital Markets Act are intended to make it easier to make these large tech companies accountable for their action in the EU market. Will these two approaches become the gold standard for other countries to follow?

The US approach of anti-trust is analysed by Eric Posner in this piece but he argues that thsi approach may not be enough to challenge monopolistic tendencies. he raisesan important point of consumer benefit. Even though there may be concentration and large monopolistic profits, arent consumers benefitted immensely? Don't we all benefit from gmail, online shopping on Amazon and some great movies on Netflix? Well, the cost is our data being used - but the benefit far outweighs the cost of privacy? he contends:

Back then, monopolists like Standard Oil were widely loathed, depicted by cartoonists as malevolent octopuses. Now, the tech monopolists are among America’s most admired companies. Especially in the context of the pandemic, millions of Americans have depended on Amazon for household goods, and used Facebook to maintain contact with family and friends. Pretty much everyone is now addicted to Netflix, YouTube, and their smartphones.

Some of these people will serve as jurors in antitrust cases, others as judges – and all of them are voters. Legal and regulatory changes are overdue, but the hard work of transforming public opinion remains.

China has been a late entrant to the challenge to big tech - its action against Ant Corp. Angela Huyue Zhang argues that it is just following a larger global trend:

To be sure, the Chinese government has legitimate reasons to be vigilant toward the country’s highly concentrated internet sector. By targeting superstar firms like Alibaba, China is following a global regulatory trend, with US and European Union policymakers similarly vowing to impose tougher sanctions against monopolistic internet giants.

Minxin Pie has a totally different take pn the approach of China on antitrust.  He argues that the anti-trust is actually pro-monoploy in a poltical sense.

It s interesting to see varying approaches to big tech around the world. How significant are the differences in approaches of the US, EU and China in tackling the alleged challenge of big tech? Where is the consumer in this debate? Who will set the agenda on this issue in the coming years? Will there be implications for international economic law in terms of non-discrimination principles? Will there continue to be heteredox approaches to address the anti-trust issue around the world - are the socio-political milieus too divergent for a global standard?

News about the possibility and implications of waiver of intellectual property rights to fight the covid pandemic is found here, here and here today.

The USTR announcement that the US will be willing to consider an IP waiver but form it will take is unclear.It specifically mentions:

We will actively participate in text-based negotiations at the World Trade Organization (WTO) needed to make that happen. Those negotiations will take time given the consensus-based nature of the institution and the complexity of the issues involved.

The proposal of South Africa and India in the WTO to waive IP rights for Covid related measures which was placed in October 2020 is found here with a draft text.

"...12. In these exceptional circumstances, we request that the Council for TRIPS recommends, as early as possible, to the General Council a waiver from the implementation, application and enforcement of Sections 1, 4, 5, and 7 of Part II of the TRIPS Agreement in relation to prevention, containment or treatment of COVID-19.

13. The waiver should continue until widespread vaccination is in place globally, and the majority of the world's population has developed immunity hence we propose an initial duration of [x] years from the date of the adoption of the waiver.

Al Jazeera has reported that a revisd treaty text and negotiation would be on the cards.

Questions about capacity to produce despite the waiver, quality of vaccines and incentive to innovate in future have been the underlying narratives in this debate.

An interesting space to watch in these trying times.

The new DDG team at the WTO 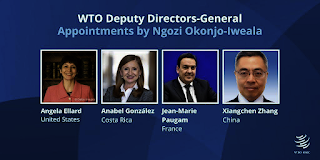 If you are not on the negotiating table, you will be part of the menu!

With the next Ministerial Conference of the WTO in the pipelines, calls for a clear negotiating agenda for the WTO is coming in.

Inu Manak from CATO suggests in this piece that the negotiating agenda being a key component of one of its functions (including adjudicatory and monitoring), a clear negotiating framework is required:

The next crucial area for reform is in the WTO’s negotiating function. The WTO has not concluded any major negotiating ‘rounds’ since its founding, though it has completed other important negotiations such as the Trade Facilitation Agreement (TFA). These stalled negotiations stem, in part, from disagreements over the level of commitment that developing countries should undertake.

Recent negotiations to eliminate subsidies that contribute to illegal, unreported and unregulated fishing, as well as subsidies that lead to overcapacity and overfishing, are a case in point. China leads the top five providers of subsidies, followed by the European Union, the United States, South Korea and Japan. Together they make up 58 per cent of all global fisheries subsidies. And while nine out of fifteen of the largest marine capture fish producers are developing members, many continue to request special and differential treatment (SDT).

The fisheries talks are important because the subject best illustrates modern challenges to trade. This is not just about subsidies, but environmental sustainability and development as well. How we navigate the intersection of these issues will test the WTO’s ability to adapt to new circumstances.

The purpose is to arrive at a binding multilateral agreement to facilitate FDI flows for development. The focus is entirely on concrete, technical investment facilitation measures, leaving aside the controversial issues of market access, investment protection and investor-state dispute settlement. Provisions for special and differential treatment of developing countries are being built in to assist implementation and capacity building, responsible business conduct and anti-corruption efforts.

These are measures that will make it easier for investors to establish themselves in host countries and operate within them, helping to increase FDI flows and advancing growth and development.

Any more agenda items? An amendment to the TRIPS Agreement for enabling waivers during a pandemic?