The WTO said just that to Russia today when it became the 154th member of the multilateral trade body. Russia will have to ratify the deal within the next 220 days and would become a fully-fledged WTO member 30 days after it notifies the ratification to the WTO.


“This is a historic moment for the Russian Federation and the rules-based multilateral trading system. After an 18-year marathon, the finish line has been crossed. This is a double win for Russia and the WTO. The package we have just adopted is the result of hard technical work, led by modernizing political leadership,” said WTO Director-General Pascal Lamy. 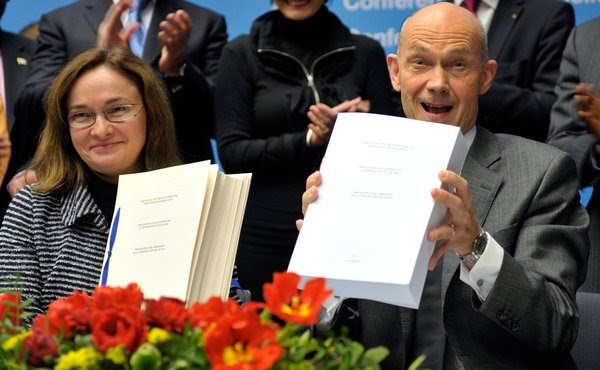 Martial Trezzini/KEYSTONE, via Associated Press
Elvira Nabiullina, Russia's minister of economic development, left, and Pascal Lamy of the W.T.O at a ceremony in Geneva.

The 12th largest trading economy entered the WTO after a long wait. As RT reported,
"Russia’s 18-year path to the WTO was almost record-slow, with only Algeria’s negotiations taking longer at the moment. It was also the world’s largest non-member economy. The hurdle was caused by the principle of consensus the organization uses, which means each member can veto its enlargement."


The Moscow Times didn't have the accession on its headline.The overhelming news coverage was the domestic political imbroglio. Instead it had an opinion from Pascal Lamy about Russia's entry,
"In Russia's long and proud history, many initiatives have been launched to integrate the country into the wider world and to open up its vastness to foreign commerce, ideas and culture.

Now Russia is embarking on an exercise of economic integration unlike any that has preceded it. On Friday at the World Trade Organization's Ministerial Conference, ministers from our 153 member countries will welcome Russia to their ranks."
The New York Timer reported,
"  Membership ends the anomaly of having Russia, a leading oil and natural gas exporter as well as a permanent member of the United Nations Security Council, outside the world trade system. Russia, with a population of 140 million, is the last major world economy to join the organization. The W.T.O. says that with Russia’s accession, more than 97 percent of all world trade will take place among member countries. It had been about 95 percent. "


The possible impact on Russia entering the WTO was discussed in this piece,


" How good WTO membership turns out to be for Russia itself is less clear-cut. Russia doesn't have much to gain in terms of better access to foreign markets, because few of its exports other than commodities are very competitive. The key point is that the main “good” that the WTO will bring to Russia is in the longer term, and it will happen by causing pain in the shorter term. Russian companies will be more exposed to direct competition from their foreign counterparts. The idea is that this pressure will in turn force Russian companies to become more competitive. That will lead to growth in the economy, higher living standards, more jobs. That’s what’s supposed to happen — in theory. But reality doesn’t have to follow that track. The immediate negative consequences — reduced sales, lost jobs — may be so severe as to be intolerable. The real question is whether Russia really will change in order to conform to the WTO rules, or whether it will bend or evade the rules. "


What impact the entry will have on Russia and on the world economy only  time will tell. As commented earlier in a piece, it is not long that the Dispute Settlement mechanism will have Russia either as a complainant or a respondent!