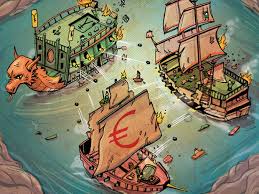 The latest trade agreement that brings alive the question whether currency manipulation issues are appropriately placed in trade deals is the USMCA. The United States-Mexico-Canada Trade Agreement has a CHAPTER on currency manipulation. This is a step forward from the Joint Declaration in the erstwhile TPP.

This CSIS piece summarizes the new chapter and the impact. This CRS short note also throws light on the issues involved. The chapter is an integral part of the agreement and not a side agreement. It has provisions relating to transparency, prior consultation as well as an undertaking not to manipulate currency for competitive advantage. It also protects legitimate monetary policy space. Well, where one does draw the line there?

Is this a positive move for trade agreement negotiations, as suggested by this Peterson Institute piece? Will this increasingly become the norm in bilateral trade deals? It has been reported that the US is considering these provisions in all its future trade deals.

I thought it was 2013 that was the year of currency manipulation in trade agreements. Five years later, the knock seems louder.

A very enlightening talk on the new US-Mexico-Canada Trade Agreement in a series called Trade Talks by Soumaya Keynes and Chad Bown.

An interesting point was that the thing that has changed vis a vis NAFTA is a whole set of new rules in the new agreement. So market access was not the defining narrative of the new agreement since most of trade was already liberalised amongst the three partners under NAFTA.

The new dimension was new rules of the game that covered inter alia the following:

1. Dispute settlement - Very interesting changes n the ISDS mechanism - limited scope vis a vis U-Mexico disputes and phase out for US-Canada disputes.
2. Labour standards - requires Members to maintain certain standards and some specific obligations on Mexico. Current NAFTA apparently has a side agreement on labour standards.
3. Rules of Origin for Motor vehicles - 62.5% car's value increased to 75% needs to be North American content and worker's wages condition.
4. Currency manipulation - not the gold standard, but some obligations that sets a precedent.

Well, this goes to show the legal complexity of obligations and the scope that trade agreements can cover.